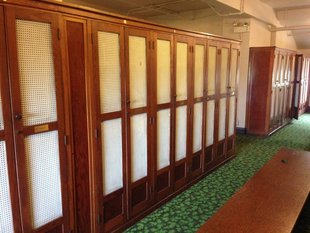 The story of Oakmont Country Club is the story of Henry Clay Fownes, and his equally intelligent, resourceful and willful son, William Clark Fownes Jr. (named after an uncle). H.C., the son of English immigrants, had to leave school at age 15 to work in the family’s iron business in Pittsburgh. Before long, he was running it, and built it into a small empire. H.C. was 21 when W.C. Jr. was born. The family business offered an insight into the character of H.C. Patriarchal even among his brothers, he retained a controlling interest in all the family business ventures. He called the shots.

Father and son were often regarded as brothers, thinking alike and acting alike. This would set the stage for the care and feeding of Oakmont, a club with a history unmatched in American golf. Oakmont has hosted 22 national championships, all of them events that travel to courses around the country. Among these are 12 majors – an unprecedented nine U.S. Opens along with three PGA Championships. There also have been five U.S. Amateurs, three Intercollegiate Championships and the 2010 playing of the U.S Women’s Open will be the Oakmont’s second.

Oakmont has to be the only course born of a household accident. One day in 1898, H.C., then 39, was using a welding or burning torch to patch a bicycle tire, but neglected to put on a welder’s mask. Later, H.C. had alarming spots in his vision. His doctor diagnosed arteriosclerosis and gave him two or three years to live. Depressed, H.C decided to enjoy what time he had left.

“…he gave up business and traveled about the country seeking relaxation,” W.C. wrote, in a family biography. Sometime later, H.C. got a second medical opinion: The spots were due to the burning torch. The death sentence was lifted. It was during this time that H.C. had chanced upon golf, and soon, though in his 40s, he became one of the better golfers in the Pittsburgh area. He would qualify for five U.S. Amateur Championships, the most important event in the country at the time. W.C. qualified for 19 U.S. Amateurs, won one, in 1910, and capped his career by becoming president of the U.S. Golf Association, the ruling body of the game.

H.C. Fownes, unlike other wealthy golf movers and shakers of his day, wasn’t looking for a high society playground when he decided to build his own course. He wasn’t trying to create a monument to himself. He was just looking for a fight. The courses in the Pittsburgh area, like most in the United States, were better suited to polite tea-party golf. So H.C. would have to build his own.

The quest was on. A friend found some nice, open farmland rolling over the gentle hills above Oakmont Borough, about 14 miles east of Pittsburgh. H.C., having put together an investment group, bought the land. The work started in the fall of 1903, and play began in the summer of 1904. As in his businesses, H.C. took the precaution of keeping a controlling interest in Oakmont. In effect, he owned Oakmont Country Club, and reserved even summary authority. A member who broke a minor club rule returned to his locker one day to find his gear neatly stacked and an edict from H.C.: He was no longer a member.

Among various Oakmont myths was a delicious one holding that H.C. first designed his dream course and then hunted up the ground to set the jewel in. It would be a romantic tale if it weren’t patently absurd. One has only to look at No. 17, that little waif of a par-4 among all those brutes. Who could possibly dream of creating a 300-yard par-4 to be shoe-horned into barely space for a par-3 1/3. Clearly, H.C. was making do in that little corner, and he ended up, it turned out, with one of the great holes in the game. Not because it’s so difficult, but because it’s so devilishly tempting. A bold golfer going for that green could really cash in -- or could crash.

Reason says this: H.C. studied his land, then fitted his course to it, much like Beethoven listening to a messenger only he could hear. Most courses are “strategic” in layout, offering the golfer more than one route to the green, but Oakmont was the prototypical “penal” course, offering one way, the straight-and-narrow. If you stray, you pay.

Enter another Oakmont myth, the one that says although H.C. designed the course, it was W.C. who turned it into a legendary monster, throwing furrowed bunkers all over the place and making the greens wickedly fast. W.C was also the most vocal, with historic pronouncements. As to the many bunkers, he said, “A shot poorly played should be a shot irrevocably lost.” And as to the unrelenting difficulty of Oakmont, he sounded a bit like Captain Ahab in pursuit of that whale: “Let the clumsy, the spineless, the alibi artist stand aside.” Compared to W.C., H.C. was silent. Indeed, little of H.C. is known, apart from the fact that he liked golf, cards, a drink, a smoke and fast cars. The key lay in W.C.’s writing. It was clear that W.C. idolized his dad, and that he recognized him as supreme in all things. Would H.C. turn his club over to anyone? Even the British betting houses wouldn’t touch that wager. W.C. tinkered extensively with Oakmont, adding bunkers, working on greens, but it’s clear he was either under his dad’s orders or had his permission.

What H.C. had intended to be a sturdy and worthy test for him turned out to be one of the great golf courses in the world. Many called it the fiercest course of all. Such things are impossible to prove by any method. But nobody ever contradicted the notion. And few if any courses, have had the praises and curses sung as Oakmont has over the years. Ron Whitten, noted golf course architecture writer, said Oakmont would be “front and center” if there were a Mount Rushmore of great courses. Back in 1927, Tommy Armour, the Silver Scot, spoke of “muscle-tightening terror.” At the 2007 U.S. Open, Ernie Els spoke of the speed and undulations of the greens. “These are the toughest greens we’ll ever play in U.S. Open history, or any other golf tournament we play,” Els said. It was an echo of Sam Snead, many years earlier, saying, “I put a dime down to mark my ball, and the dime slid away.”

“This course,” said Ireland’s Padraig Harrington, “makes Winged Foot seem very -- pleasant, let’s say.” And Spain’s Sergio Garcia, at the ’07 Open, noted that Oakmont, a par-70 course, was pretty good for a par-78. “And I’m not kidding,” he said.

H.C. was president of Oakmont from its founding, in 1903, until his death in 1935, and W.C. was president from then till his resignation in 1946. Oddly enough, the authoritative father-son combination sowed the seeds of discontent at Oakmont. They envisioned a golf club, much like the celebrated courses of Britain. But American clubs, family-oriented, needed a variety of pastimes and social events in order to attract members, the financial life blood of any club. The Fownes' granted some things, but drew the line at a swimming pool.

W.C. knew Oakmont was in danger with a shrinking membership. He realized the pool was necessary for the good of the club, but he refused to be part of it. He resigned in 1946. He died in 1950, and the pool was installed in 1954. Oakmont survived, and was still Oakmont. History was funny. H.C. Fownes, the man who never thought of building a monument to himself, ended up with his monument.
HTML Comment Box is loading comments...