Torrey Pines Golf Course is a 36-hole municipal public golf facility on the west coast of the United States, owned by the city of San Diego, California. It sits on the coastal cliffs overlooking the Pacific Ocean in the community of La Jolla, just south of Torrey Pines State Reserve. Opened 60 years ago in 1957, it was built on the site of Camp Callan, a U.S. Army installation during World War II.
Torrey Pines has two famous 18-hole golf courses, North and South, both designed by William F. Bell (son of noted course architect William P. Bell). The South Course was redesigned by Rees Jones in 2001, and is now 7,698 yards (7,039 m) in length from the back tees with par at 72.[4] The North Course was redesigned by Tom Weiskopf in 2016, switching the front nine with the back nine so that the famous ocean views are now enjoyed by golfers finishing their rounds.[5]
Since the late 1960s, Torrey Pines has hosted the Farmers Insurance Open on the PGA Tour. Held annually in January or February, the tournament uses both courses for the first two rounds and the South Course for the final two rounds; it was held January 28–31 in 2016. Torrey Pines hosts the San Diego City Amateur Golf Championships every June, and the Junior World Golf Championships every July. It hosted the 2008 U.S. Open on the South Course, won by Tiger Woods in sudden-death after an 18-hole playoff versus Rocco Mediate.
Much like Bethpage Black (on Long Island, New York), Torrey Pines has a unique method to ensure continued public access to the course. On weekends, individuals arrive as early as 6 p.m. the prior night to get in line for the first-come, first-served tee times that are given out from sunrise till the first reservations at 7:30 a.m.

Clubhouse at Torrey PinesThe course is named for the Torrey Pine, a rare tree that grows in the wild only along this local stretch of the coastline in San Diego County and on Santa Rosa Island.[8] The logo (illustrated: right) features a salt pruned representation of the tree. 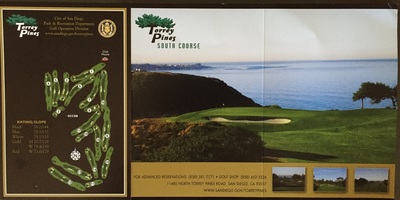 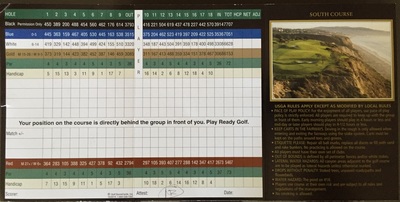